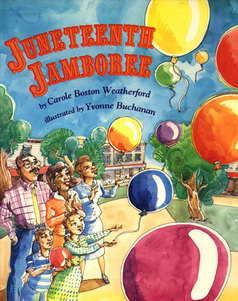 Synopsis
It’s a fine day in June. Cassandra’s family has just moved from the city back to her parents’ hometown in Texas. Cassandra likes her new house, and her new school is okay, but Texas doesn’t quite feel like home yet. Cassandra wonders what summer in this new place will hold.

What Cassandra doesn’t know is that her family has a surprise for her – a Texas tradition. As she helps prepare red velvet cake, fried chicken, and piles of other dishes, Cassandra wonders what makes June 19th so important. After all, Memorial Day has passed and the 4th of July is still two weeks away. It isn’t until Cassandra and her family arrive downtown that she discovers what the commotion is about. It’s Juneteenth, and the town is holding its annual Juneteenth Jamboree. In the process of learning the significance of the celebration, Cassandra realizes that she and her family have indeed come home to family and tradition.

Background
Juneteenth, a blend of the words "June" and "nineteenth," is an emancipation celebration that is said to have begun on June 19, 1865, when Union Army soldiers arrived in Texas and informed slaves that they were free. It took this news two years, six months, and nineteen days after President Abraham Lincoln signed the Emancipation Proclamation to reach the slaves of Texas. Learning of their freedom, the joyful ex-slaves set out to find family members from whom they had been separated (thus the emphasis on family reunions at this time), and finally follow their dreams.

Over the years, different legends have been created to explain the reason for the delay in freeing the slaves of Texas, including the story that the messenger was sent from the nation’s capitol on a mule. Today, African Americans come together all around the country to celebrate Juneteenth with traditions from the early days, including parades, picnics, music, speeches, crafts, and African dances. It is a celebration of freedom and hope.

In 1980, June 19th was made a legal holiday in Texas. Juneteenth is also celebrated in many others states. Every year, several million people of many different backgrounds celebrate Juneteenth in over 200 cities in the United States.

Setting a Purpose for Reading
Invite students to examine the front cover of the book. What do you think "Juneteenth" means? What does "jamboree" mean? What does the picture suggest? Why do you think people have jamborees?

Vocabulary
Cassandra is told that she will experience "a Texas tradition." Explore the meaning of tradition. Ask students to volunteer different examples of traditions and what makes these traditions special.

Have students scan the story for unfamiliar words such as tater, cloves, calico, junebugs, fellowship, pinafores, fiddler, patchwork, promenade, spirituals, newfound. List these words on the chalkboard and briefly discuss students’ thoughts about what the words mean. Then suggest that students write a sentence using each word.

After Reading
Discussion Questions
After reading the book, you may wish to use some of these questions to generate discussion and expand students’ understanding of the text.

Reader's Response
Help students personalize what they have read by encouraging them to respond to one or more of the following. Students might respond in sketchbooks, journals, or oral discussion.

Math
Have students find out the locations of their parents’ hometowns. Create a chart of all the hometowns and have students use appropriate maps to determine the distances of the hometowns from your community. Whose parents grew up furthest away?

For students whose parents grew up in the community, have students speak with relatives to determine the amount of time the family has lived there.

Music
Listen to a recording of spirituals and read their respective lyrics. Encourage children to join in with the singing. They may also like to learn one or more of the songs and perform them for an audience.

Drama
Several holidays are mentioned in the story. List them on the chalkboard and have students play a game of Charades in which students try to guess which holiday is being acted out. Students may wish to add additional holidays not included in the story to make the game last longer.

About the Author
Carole Boston Weatherford is a poet and journalist originally from Baltimore, Maryland. She holds an M.F.A. from the University of North Carolina at Greensboro, and in 1992 was the winner of the North Carolina Writers’ Network of Black Writers Competition.

Juneteenth Jamboree is Weatherford’s first picture book. When asked why she decided to write this book she replied, "I wanted to enhance today’s children’s appreciation of the freedoms they enjoy. I also aim to heighten children’s awareness of—and thus keep alive—cultural traditions. . . .To preserve our rich heritage, we must pass it along to our youth."

Ms. Weatherford lives in High Point, North Carolina with her husband and their two children.

About the Illustrator
Yvonne Buchanan is a full-time illustrator. She graduated from the High School of Art and Design and from Parson’s School of Design, both in New York City. 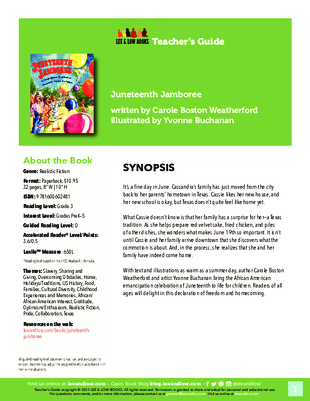