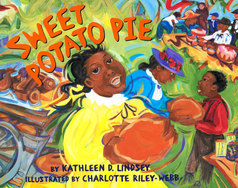 Even as a child, Kathleen D. Lindsey knew she wanted to be a writer. “When I was 4 years old,” says the author, “my Mom would give me old junk mail to keep me quiet, especially in church. I would scribble on every inch of those papers, pretending I was a great writer. Then I had to read it to someone that had time to listen. That was the hard part!” Her perseverance paid off, for in the fall of 2003 her first picture book, Sweet Potato Pie, was released by LEE & LOW BOOKS.

In this fictional story set in the South in the 1920s, an African American girl and her family sell Mama’s sweet potato pies at the Harvest Celebration to raise money and save their farm. The idea for the story came from some of Lindsey’s own experiences baking and selling her own sweet potato pies. “In the fall, when sweet potatoes were plentiful,” says Lindsey, “the children and I would go into the 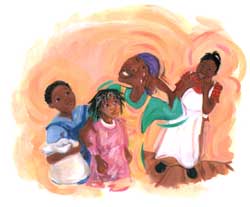 fields and gather the leftovers that the farmers could not use. Then we worked together, baking pies to sell for extra money when times got tough.” Like Sadie and her family, Lindsey sold her pies at a community fair. “My sisters and I would sell baked goods and soups at a special, two-day community event called the Mullica Hill Open House. I always baked plenty of pies and they sold out quickly. People would come from miles around just to buy my pies. I knew then that I had enough information for a great story.”

Lindsey says she’s always enjoyed telling stories about families working together for a common goal. So what’s her favorite part of this story? “My favorite part is when Sadie and Jake come into the kitchen covered with flour. Then Mama lets out a big scream and cries tears of laughter. In real life, my children would often make a mess of things when trying to help me. But I loved Mama’s reply, ‘My babies did their best.’”

Kathleen D. Lindsey won the New Jersey General Assembly Award for “A Stitch in Time,” a performance highlighting the history of African Americans before and after the Civil War. She is currently working on four more stories that represent family life. The author and her family live in Clayton, New Jersey. You can visit her at katlindsey.com.