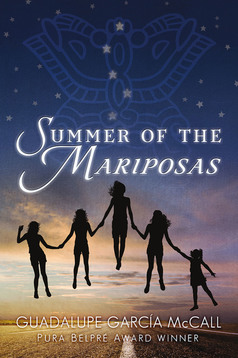 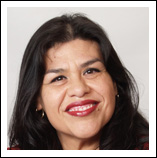 Odilia and her four sister take the roadtrip of their lifetime in Summer of the Mariposas. On their journey to return a dead man to his family in Mexico the cinco hermanitas meet many mythical creatures, including the ghostly La Llorona and bloodthirsty chupacabras. In this BookTalk Guadalupe Garcia McCall discusses Mexican folklore, her favorite part about writing Mariposas and what people in Texas are secretly afraid of.

How was the experience of writing Summer of the Mariposas different from writing your first book, Under the Mesquite?

Guadalupe Garcia McCall: Writing prose is definitely more liberating than writing poetry. At first, I found it hard to abandon structure. My mind likes to pare things down, to unfurl everything, expose the heart of things, so I had to learn to explore character motivation through narration and Odilia’s interior monologue. But that was exciting too. I liked getting in her head, figuring out how she felt and why she acted the way she did. I have to admit though, I loved writing Summer of the Mariposas; the process was quick and painless. It was a joy to sit at my computer every afternoon and let the movie play in my head and just type it all up. The girls were very much alive in my mind, and they said and did things that tickled me and embarrassed me and even frustrated me, because they are so willful, so bratty, but I loved that about them. They were very much the reinvention of my sisters coming to life in a whole new story of us. Theirs is a completely different life than the one we lived, the one we survived without our mother. So while in writing Mesquite, I was reliving a very sad time in my life, in writing Mariposas, I was reinventing it, making it a quest–a reconnection with our mother, a new beginning in a brave new world.

Summer of the Mariposas combines elements of The Odyssey as well as Mexican folklore and myths. What inspired you to write the book using these sources?

GGM: For a very long time, years actually, I’d been toying with the idea of retelling The Odyssey with an all-female cast. The idea of flipping the ultimate male adventure and turning it into a feminine quest with all the strengths of womanhood fascinated me. But nothing had ever really materialized in my mind, until the day my eighth grade students had a long classroom debate over the gender issues in The Odyssey. As she left my class, one of the girls said, “But why do boys get to have all the adventures? It’s not fair. We need our own Odyssey.” That’s when it clicked for me. She was right. Girls her age need to see themselves depicted in that light. They need to have books where they are wise and clever and brave.

But why stop there? my brain asked. Why not really turn this thing on its ear and make it about Hispanic girls? Better yet, why not make it about our culture? We have myths and legends and monsters and heroes and ancient deities who are just as interesting as the ones in the original text. Suddenly it all came together for me, and I went home, took out the sticky notes, and outlined the entire adventure on my wall. It was like playing Loteria. Fun. Fun. Fun.

Did you go into the writing process knowing that you wanted to portray the usually-feared figure of La Llorona in a more positive way?

GGM: When I first thought about who to cast in the role of “Supernatural Aid” several figures came to mind. Of course, La Virgen de Guadalupe was first and foremost in my thoughts. But she seemed like the obvious choice, and I had promised myself that I wouldn’t be prosaic. That I would do whatever was necessary to turn this story upside down because I wanted it to be creative and different and original. So I challenged myself to find an “unexpected” figure for the role of mentor and guide. I wanted a questionable character, a sort of twist in the plot, so I considered La Llorona for the part. But before I put her in that situation, I had to sit down and think about what she had to offer. I wanted to make sure she was the right character for the position. And when I “listened” to her story, when she explained herself to me with such sadness and penitence and regret, I knew she was absolutely perfect for that role. La Llorona has a pure mother’s heart, and that’s what my girls needed, a mother figure with their best interest in mind to help them as they made their way through this difficult journey. Once it was all said and done, and her story unfolded itself at the end (I don’t want to spoil it, so I won’t tell you any more here), I was glad I had cast her in that role. I didn’t know it until I wrote that final scene with her and Odilia and La Virgen de Guadalupe, but La Llorona “needed” this job, and I was glad I had chosen her.

[Spoilers ahead: skip to the next question if you want to avoid them.] While Odilia shares many traits with Odysseus, the protagonist of The Odyssey, she also reminded me of Odysseus’s son, Telemachus, who grew up without knowing his own father. The ending is also a kind of reversal of The Odyssey in that the girls’ father does return, but doesn’t measure up to the standards that his family expects of him. Was this a conscious decision on your part, or did you find that in concentrating on the female characters, the need for a heroic father figure was no longer necessary?

GGM: A lot of what happens at the end of the book is what I like to call a writer’s “magical moments”. What I mean is that I didn’t really see it coming; the end just grew and unfurled unexpectedly, weaving itself organically into the plot as I tried to pull all the story threads together.  The scene with Papá and his Sirena at the end caught me by surprise. I knew that he would return and that the girls and Mamá would not accept his excuses. But it took me a long time to write that scene because I didn’t really understand how it was going to unfold. I actually had writer’s block when I came to that scene. I couldn’t write it for months and I didn’t know why until one day it hit me. I was trying to come up with plausible excuses for Papá to offer the girls when he finally shows up. But then I realized there is no excuse for him, and he knows it; so he wouldn’t be trying to excuse himself. Once I came to that heartbreaking conclusion, I was able to sit down and finish telling the story.

What was your favorite part about writing Summer of the Mariposas?

GGM: The lechuzas (owls) were absolutely my favorite scene to write because they are such a huge part of our everyday culture in South Texas. People here are secretly afraid of them. I suspect they are bothered by the sight of them because it awakens something primordial in them; they are mortified by their own fears as they fight the urge to condemn them. My own grown son and his girlfriend recently mentioned being bothered by the sight of a huge owl that’s been sitting on our internet antennae lately. I told them it is just looking for a high place to perch as it watches out for field mice, but I could hear the foreboding they fought to placate as they talked about how “weird” it felt to have one looking down at them when they got home after school every night in the dark.

The reason lechuzas are so feared in these parts is that they are said to visit humans right before they are to die. They supposedly come to people on their deathbeds, perch on their chests, claw at their faces, and tell them all their sins before they die. That’s pretty scary stuff, and definitely something to be afraid of. It was the lechuzas’ ability to speak to such an unsettling purpose, to have the last word before death comes, to strike such fear in the human soul, that I thought made them the perfect creatures to cast in the place of the sirens inThe Odyssey. I really enjoyed writing their dialogue, and I have been enjoying reading it at author visits. Interpreting that scene and making the different lechuza voices is giving me an opportunity to showcase my dramatic side.