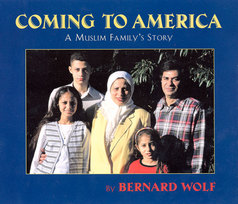 Written and photographed by Bernard Wolf

Rowan Mahmoud’s father arrived in the United States eight years ago from Alexandria, Egypt, in search of a better future for his family. After four years of hard work and frugal living, he could finally afford to bring his wife and children to live with him.

Young Rowan and her family are Muslims. They live in a multiethnic neighborhood in Queens, New York, and in many ways are just like other Americans. The children attend public schools and enjoy watching television and playing with their friends in their spare time. But the Mahmouds also live in a way that preserves their culture and religious identity. They shop in Middle Eastern markets, prepare traditional meals, and follow the teachings of Islam. The transition to American life has not been easy for the Mahmouds, but devotion to family and religion keep them strong.

With captivating photographs and engaging text, Bernard Wolf invites us into the life of this close-knit family — a family whose love and courage speak for all immigrants who work hard and make sacrifices in the pursuit of a better life.

is a photojournalist known for his perceptive and sensitive photo-essays on topical issues. Since his first book was published in 1969, Wolf has gone on to photograph and write almost twenty more books for children. His recent works include Cuba: After the Revolution (Dutton, 1999), HIV Positive (Dutton, 1997), and Homeless (Orchard, 1995). In 1981, Wolf was honored by the American Library Association for his books on the disabled during the International Year of the Disabled. His photographs also appear in several Time-Life and National Geographic books, and in magazines including Fortune, New York, and Travel/Holiday. Wolf lives in New York City.