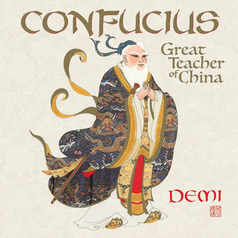 Illustrating in a delicate style that strongly evokes her ancient Chinese setting, Demi introduces the life and teachings of Confucius (known as Kongzi in China), blending facts and legends surrounding the educator and philosopher. Mythical stories surround Confucius’s birth (“One adds that a comet, two protective dragons, and five old men representing the planets and stars appeared in the sky to celebrate”), and Demi explains how his desire to bring order to the social and political turmoil of his era led him to enter government. But his true triumphs came through teaching, and Demi incorporates his philosophies throughout (“In both government and private life, perhaps the most important word to Confucius was shu… which means ‘compassion’ or ‘open-heartedness’“), giving readers a rich understanding of his beliefs and impact.