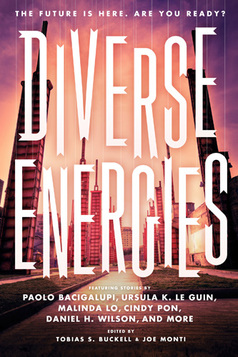 This anthology speaks to inevitable jumbling of the world’s cultures, frequently using dark dystopian stories. . . . In “Freshee’s Frogurt,” which will appeal to boys, Daniel H. Wilson tells of a police officer questioning a teen who survived an attack by an-out-of-control robot. One of the better stories, “The Uncertainty Principle,” by K. Tempest Bradford, is about a girl caught up in a time warp where the world constantly changes around her. In “Pattern Recognition,” Ken Liu tells of a boy who discovers the compound he lives in is full of lies. Greg van Eekhout’s “Gods of the Dimming Night,” is a compelling mix of improbability and mythic intrigue about an Indonesian-American boy who ends up fighting and killing a warrior from Odin’s army.