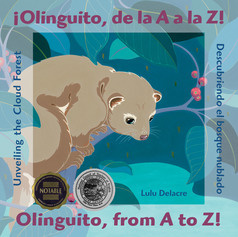 ¡Olinguito, de la A a la Z! Descubriendo el bosque nublado /Olinguito, from A to Z! Unveiling the Cloud Forest

In 2003, a team of scientists discovered a new species, the olinguito, in the cloud forest of Ecuador; Delacre introduces readers to this relative of the raccoon along with the many other species of animals and plants that share its habitat. Delacre uses alliteration in the parallel Spanish and English texts to make for an engaging, occasionally tongue-twisting read. While the alliteration doesn’t always work seamlessly in English, Delacre’s prose manages to convey the dreamy, quiet world that thrives in the moist, lush ecosystem. The mixed-media illustrations include details young readers and listeners will enjoy noticing, such as the changing colors of the sky as the day progresses and the presence of the olinguito, small and hidden early in the day, then large and prominent at night when the nocturnal creature is active. Delacre also incorporates pressed leaves and flowers into her collages and invites readers to find them in each illustration.