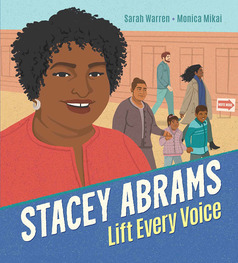 Abrams’ work to ensure that the people have a voice in who their leaders are started many years ago. As a child, she heard her parents’ stories of fighting for Black people’s right to vote during the civil rights movement. From an early age, she learned to ask, “How can I help?”—something readers see her asking herself throughout the book. As a high school valedictorian invited to the governor’s mansion, she was initially turned away by a White guard at the front gate, but her parents pushed for her to be let in. Readers also see her attending Spelman College, participating in student demonstrations after the verdict exonerating the policemen who beat Rodney King, and speaking to the media and the mayor of Atlanta about the protests and the needs of young Black people. Generous text details Abrams’ achievements, including her work as a lawyer, her election to the Georgia House of Representatives, her unsuccessful campaign for governor in an unfair election (a lack of polling places and functioning voting machines resulted in long waits for Black voters), and her extensive efforts getting voters registered and challenging unjust election laws. This is a comprehensive, inspiring biography of a leader whose moral compass guides her work. Mikai’s art faithfully represents Abrams at different ages and in various settings and helps communicate to young readers the experiences that distinguish Abrams’ life as well as the social situations and power dynamics that inform her priorities.