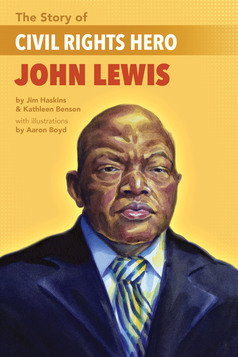 John Lewis was born to sharecroppers in segregated, rural Alabama but would became one of the most influential leaders of the civil rights movement. From a young age he wanted to be a minister and would practice preaching while caring for the family’s chickens, all the while recognizing the injustice of racism. Lewis’s first act of protest as a young man was applying for a public library card, which was denied to him because of his race. The 1960s found him an active member of the Student Nonviolent Coordinating Committee, organizing peaceful protests such as lunch counter sit-ins and Freedom Rides. His leadership and oratory skills made him the youngest of the Big Six (civil rights leaders who organized and spoke at the March on Washington). Eventually he was elected congressman in 1986, a position he still holds. Descriptive imagery and engaging writing combine for a brief but fascinating account of this significant individual. Thorough sidebars present background information on themes relevant to Lewis’s life. The mix of illustrations and historic photos capture the conflict of the time. The comprehensive back matter includes a time line, a glossary, and a fairly exhaustive source list. VERDICT An ideal choice for reluctant readers and young researchers.