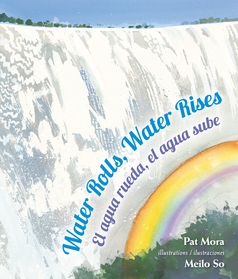 Review
By The Horn Book Magazine

“Water rolls / onto the shore / under the sun, under the moon. / El agua rueda / hacia la orilla / bajo el sol, bajo la luna.” Fourteen three-line verses, in English and Spanish, celebrate water in its many forms, from frost and fog to waves and waterfalls. Each verse is accompanied by a majestic double-page-spread painting from a specific place in the world, from Arizona to Zambia, and a visual index at the end of the book tells us exactly which place inspired which painting. Illustrator So provides some unusual perspectives, such as the view from the dynamic waterline of a well, looking up into the faces of Kenyan village women who have just lowered their buckets. Place names are not mentioned in the poems themselves; rather, the poems speak to the wonders of water everywhere, whether it “rests, / drowsy in reservoirs” or “plunges, / in thunder’s brash roar.” Mora skillfully uses alliteration and assonance in the English versions of the poems (“Swirling in wisps, / water twists then it twirls”); this is mostly lost in the literal Spanish translations. However, sibilant consonants often offer a splash of onomatopoeia (“Girando en espirales, / el agua se enrosca y se retuerce”). In either language, the poems, read aloud, can be as dramatic as the accompanying illustrations.