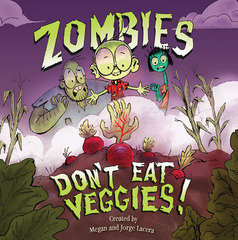 A young boy who happens to be undead reveals himself as a vegetarian to parents who are not about to stop eating people parts. Mo, a greenish, bespectacled kid, has an idea to share his love of the veggies he grows in secret: He'll make a bloody-looking gazpacho, one that might fool mom and dad into appreciating tomatoes, cucumbers, onions, garlic, and cilantro. The gambit fails. But even if the rotting folks can't accept heaps of vegetables in their diet, they can learn to honor their son's dietary desires. That's an admirable message, but what really creeps up on readers is the Laceras' deep sense of fun. Gravestone puns are to be expected, but to sneak in a reference to Jonathan Saffron Gore hits all the right geek buttons, at least for the kind of parent who'd gravitate to a zombie-themed picture book. And while understated, the family's effortless use of occasional Spanish phrases ("arm-panadas"!) in a primarily English-speaking household feels true. The Spanish-language version (translated by Yanitzia Canetti) has its own specific jokes and reads just as smart and funny. The artwork throughout manages to make zombie-grown produce look appealing. Tasty and homegrown, this hits a strange and specific trifecta: a lightly bilingual book that feels inclusive not only for Latinx kids, but also for different eaters and for those who aren't afraid of gory, monster-themed humor.