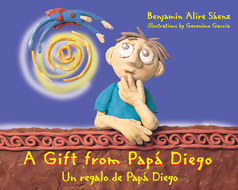 A Gift from Papá Diego

Little Diego loves his grandfather, but they don't see each other often because Papá Diego lives in Mexico and Little Diego lives in Texas across the border. One day Little Diego's father gives him a pile of comic books that his father had when he was growing up. In those comic books Little Diego discovers Superman. Maybe if he was like Superman, then he could fly off to see his grandfather in Mexico! So Little Diego tells his mother that he wants a Superman outfit for his birthday. His parents buy him one, but, of course, Little Diego cannot fly. He's heart-broken. Still, because he has had the daring to imagine, a wonderful event occurs and he enjoys one of his happiest birthdays ever! Each illustration in Papá Diego was built out of terra cotta clay and painted with acrylic paints. This gives the illustrations a 3 dimensional quality which kids will love!

Geronimo Garcia is a highly successful and internationally recognized graphic designer. Like he did for Sáenz's highly successful A Gift for Papa Diego (60,000 in print) he hand-crafted the little clay figures and created the colorful book design in The Dog Who Loves Tortillas. He lives in El Paso, TX.