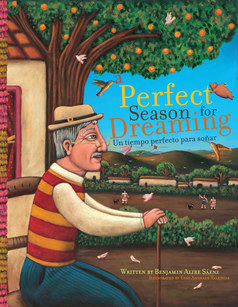 Seventy-eight year-old Octavio Rivera is a beautiful dreamer. And lately he has been visited by some very interesting dreams--dreams about piñatas that spill their treasures before him, revealing kissing turtles, winged pigs, hitchhiking armadillos, and many more fantastic things! He longs to tell someone about his dreams, but who else in his life would understand their full beauty? And then he remembers his young granddaughter Regina, because she too appreciates beautiful and fantastic things. Once he tells her, his heart at rest, Octavio prepares for his siesta, hoping to be blessed with one long, last, lovely dream.

With gorgeous folk art-inspired illustrations and the humor and depth of all Benjamin Alire Sáenz's work, A Perfect Season for Dreaming unfolds the sweet possibilities in relationships between the very old and the very young.

Esau Andrade Valencia comes from a family of Mexican folk artists. His paintings are included in the collection of the Museum of Latin American Art as well as in the Downey Museum of Art in California. His books for Cinco Puntos Press include A Perfect Season for Dreaming / Un tiempo perfecto para soñar and Don't Say a Word, Mamá / No digas nada, Mamá.