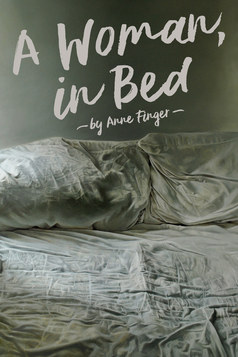 A Woman, In Bed

Simone comes of age during World War I. She comes into her own in World War II as part of the French resistance. Frequently, she abandons herself to lust--particularly to a man named Jacques. She leaves her first husband for him and spends over a decade as his lover. They eventually marry, yet Simone still sleeps with strangers, her husband the most distant of them all. What is she seeking? Simone isn’t sure. More than sex--a tenderness that lust can never fill. Just when her body feels most fragile, she meets Pierre, a much younger man, a novice at love-making, clumsy and overly emotional, a fool--yet there is something about him. A lifelong love story not about the relationship between two lovers, but between a woman and her body.

Anne Finger is a writer of fiction—both short stories and a novel—as well as of creative non-fiction. She is currently the Holtzbrinck Fellow at the American Academy in Berlin. Her short story collection, Call Me Ahab, winner of the Prairie Schooner Award, was published in the Fall of 2009 by the University of Nebraska Press. She has had four other books published. Her short fiction has appeared in The Southern Review, Kenyon Review, Discourse, and Ploughshares. She has taught creative writing at the university level as well as teaching workshops in the community. She has also been awarded residencies at MacDowell, Yaddo, Djerassi, Centrum and Hedgebrook. She lives in Oakland, California.