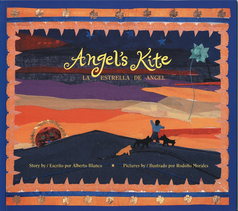 No one knows what happened to the bell in the church tower. Did the priest sell the bell to a foreign collector? Did revolutionaries melt it down and turn the metal into cannons? Or was it magic? Whatever the reason, the town hasn't been the same since. To heal the pain of this loss, Angel, the young kite maker, creates a beautiful kite that shows the whole town—including the missing church bell. After an exciting chase and a lonely night on a cold mountaintop with his three loyal dogs, Angel succeeds in bringing back the bell to his beloved town.

is one of Mexico’s most outstanding poets. He is the award-winning author of over 20 books, including The Desery Mermaid published by Children's Book Press.

was one of Mexico’s greatest artists of his time. His works can be seen in museums and galleries around the world. He created the collage pictures in Angel's Kite especially for Alberto Blanco's story, which was in turn inspired by Rodolfo's own childhood as a kite maker in his beloved town of Ocotlán, in the state of Oaxaca, Mexico.