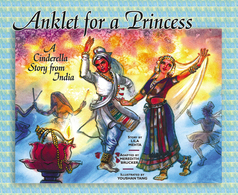 Anklet for a Princess: A Cinderella Tale from India

Cinduri has a lot of work to do. Every day she walks to the lake to fetch drinking water, milks the cow, cleans the house, prepares the meals, cleans the animal pens, and sells vegetables. Her stepmother and stepsister, however, don’t do any of the work. They just order Cinduri about and give her a bowl of rice and a few leftovers to eat.

The lake, however, is full of magic. When Godfather Snake hears of Cinduri’s troubles, he vows to make her life easier. And when the Prince comes to visit the village during the annual Navaratri Festival, Godfather Snake makes it possible for her to go, dressed in the most beautiful gold-threaded sari and sparkling diamond anklets. It is there that she wins the heart of the Prince.

Adapted from the East Indian story "Nagami" (Jewel of the Snake), this version of the tale is rich with the traditions and culture of India while also conveying the universal values of the Cinderella story. Beautiful watercolor depictions of Indian life and styles accompany this introduction to Indian folklore.

For educator resources and ideas on how to teach Cinderella Around the World in the classroom, click here.

Meredith Brucker is a graduate of Stanford University who makes her home in Southern California. She worked for many years as a writer and story editor in the TV industry -- for CBS, MGM, and KTLA -- and is currently employed raising public awareness of childhood cancer. A popular writing teacher, she is the author of many articles and book reviews for magazines and newspapers, and nine published novels.

Lila Mehta was born in Rajkot, India, and graduated as a nurse and midwife in London, England. In 1965, she arrived in Canada where she graduated from the University of Toronto. She lives in Toronto with her husband and son, and teaches for the Scarborough Board of Education in Scarborough, Ontario.

Youshan Tang grew up in Shanghai, China, and graduated from the Central Academy of Fine Arts and Peking University with degrees in Chinese art and literature. Since 1980, Tang has made his home in San Francisco where the cultural diversity inspires his work. He is also the illustrator of Abadeha: The Philippine Cinderella and Anklet for a Princess: A Cinderella Story from India.