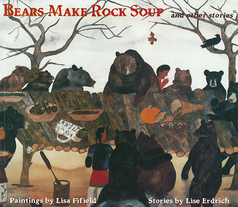 In this collection of paintings and stories, painter Lisa Fifield and writer Lise Erdrich honor their Native American tradition in their own unique ways. Together they pay homage to the people, animals, forests, and rivers that have lived in harmony beneath the wide skies of the Plains.

As winter falls, women fill the bellies of hungry bears with sweet stories, so they will sleep till spring. Crows call out a warning of enemy soldiers in pursuit so that a tribe may escape to safety unharmed. An abandoned yearling moose is cared for by children who find him crying for his mother. And animals of all stripes and feathers gather to pay respects to a beloved chief who has fallen defending his people.

is a counselor and health educator at the Circle of Nations Indian School in Wahpeton, North Dakota. She is of Native American and German descent and is enrolled in the Turtle Mountain Band of Plains Ojibway. Her grandfather, a tribal leader and historian, encouraged her interest in writing and in the Ojibway language and culture. Lise's writing has appeared in literary magazines and anthologies. © Louise Erdrich

is a renowned watercolorist and quiltmaker. She is of Native American and German descent and is enrolled in the Oneida Tribe of Indians of Wisconsin, which is one of the Five Nations of the Iroquois Confederacy. Her award-winning artwork expresses her history, culture, and experience as a Native American woman. Lisa's paintings have been exhibited in museums and galleries around the world. © Leo R. Horey