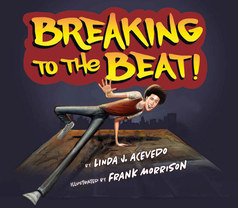 Breaking to the Beat!

A boogie-down picture book about a shy boy named Manolo who overcomes his fears and insecurities to become part of a new innovative dance style called breaking.

Step back, step back!

In the 1970s, many said the Bronx was just a pile of rubble, but for a shy kid like Manolo, it was alive with rhythm and music. He grew up with salsa dance parties at home and DJs battling on turntables on the street. Inspired by these new beats and the moves of James Brown, neighborhood boys and girls started dancing with a mix of twists, slides, and shuffles. The rhythm of the Toprock. Drop of the Six-step. Wiggle of the Worm. A new dance style called breaking was on the rise, and Manolo wanted to be a part of it.

Debut author Linda J. Acevedo was inspired to write this story from the many b-boys and b-girls whose love of dance propelled them to create an innovative and groundbreaking new form of dance. Coupled with award-winning illustrator Frank Morrison's sinuous and pulsating art, Breaking to the Beat! is an energizing ode to the Boogie Down Bronx and to Hip Hop--a movement that would forever change the course of music, art, and culture.

Linda J. Acevedo is a New York native who was known to do the toprock and six-step at birthday parties and in her backyard. She is thrilled she gets to share this story about the origins of breaking and Hip Hop with young readers. This marks her authorial debut.

Frank Morrison is a fine artist and illustrator of numerous award-winning books, including the Coretta Scott King Illustrator Honor winner Little Melba and Her Big Trombone. Before becoming an illustrator, Morrison was a well-known graffiti artist and accomplished dancer. Morrison lives with his family in Georgia. To find out more about Frank Morrison, visit his web site: www.morrisongraphics.com