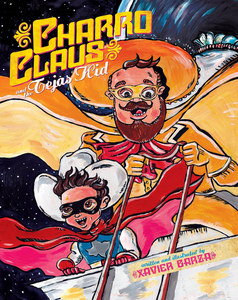 Charro Claus and the Tejas Kid

Written and illustrated by Xavier Garza

Let's welcome Santa's newest helper: his cousin Pancho, a farmer living down in South Texas who is so smart he speaks both Spanish and English. Back in the day, Pancho was a mariachi singer with a whole lot of style and a fancy sombrero. But as the years passed, Pancho got, well, a little older and a little wider all around. Then one night his primo Santa Claus showed up. Santa needed some help along the US/Mexico border. Pancho volunteered. And then, poof, Santa transformed Pancho into the resplendent Charro Claus with his incredible Flying Burritos. And Charro Claus, it turns out, even had his own surprise elf--his nephew Vincente!

All Christmas Eve, Vincente and Pancho deliver toys to the boys and girls on the border. Neither rain, cloudy skies, wire fences, or concrete walls keep them from covering every inch of their newly assigned territory. And they don't forget a single town or city. How could they? The border is their home.

Born and raised in the Rio Grande Valley, author and lucha libre aficionado Xavier Garza is a prolific and enthusiastic author, artist, and storyteller whose work focuses primarily on his experiences growing up in the small border town of Rio Grande City and is a lively documentation of the dreams, superstitions, and heroes in the bigger-than-life world of South Texas. Garza has exhibited his art and performed his stories in venues throughout Texas, Arizona and the state of Washington. He has authored and illustrated fourteen books, and has received such prestigious awards as the Americas Honor Book Award in 2005, the Tejas Star Book Award three times from 2007-2010 and the Pura Belpré Honor Book award in 2012. In 2014 he was awarded both the NAACS Tejas Young Adult Book Award and the Texas Institute of Letters Children’s Book Award. In 2019 Xavier Garza will be inducted into the prestigious Texas Institute of Letters. Garza lives in San Antonio, Texas with his wife Irma and their teen son Vincent.