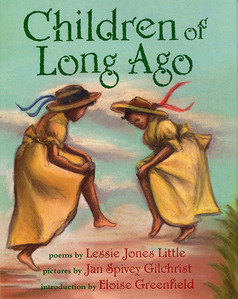 Children of Long Ago

What was it like long ago? What did children do? Were they like me? Did they feel the same way I do? These are things all children wonder about. Lessie Jones Little, mother of distinguished children's book author Eloise Greenfield, answers these questions for children by drawing on memories from her own rural childhood in the early 1900s. In this collection of lyrical, warmhearted poems, children splash through puddles, wait with anticipation for Papa to come home, and share a special reading time with Grandma, much like children of today.

In the new introduction, Eloise Greenfield pays loving tribute to her mother—to her creativity, to her vision, and to the timelessness of the words she has left for all of us.

was born in North Carolina in 1906 and died in 1986. She began writing in her late sixties and continued to write for the rest of her life. She co-authored two children's books with her daughter, Eloise Greenfield, one of which, Childtimes: A Three-Generation Memoir, was named a Coretta Scott King award and Boston Globe/Horn Book Honor Book.

is a celebrated poet and the author of more than forty books of fiction, poetry and biography for children, including the Coretta Scott King Award winner Africa Dream, The Coretta Scott King Award Honor books Mary McLeod Bethune and Childtimes: A Three Generation Memoir, co-written with her mother. Greenfield is the recipient of the Hope S. Dean Award from the Foundation for Children's Literature, and the NCTE Award for Excellence in Poetry for Children. She has received the Hurston/Wright Foundation's North Star Award for Lifetime Achievement, a Lifetime Achievement Award from the Moonstone Celebration of Black Writing, and has an Honorary Doctor of Education Degree from Wheelock College in Boston. Greenfield has also been inducted into the International Hall of Fame for Writers of African Descent. She lives in Washington, D. C.

was a fine artist and art educator for nearly twenty years before she entered the children's book field in 1988, with Children of Long Ago. Since then, she has illustrated more than fifty books for children, including many by Eloise Greenfield. Their book, Nathaniel Talking, won the Coretta Scott King Illustrator Award and an Author Honor. Gilchrist was inducted into the International Hall of Fame for Writers of African Descent in 2000 and the Society of Illustrators in 2001. A native of Chicago, she lives in Olympia Fields, Illinois. Visit her online at Jan Spivey Gilchirst.