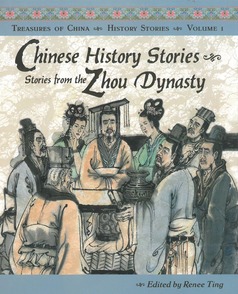 Foolish kings, clever scholars, brave generals, and kindhearted princesses you ll find them all in the rich and colorful history of China, and in the stories told by generation after generation of Chinese people. For thousands of years, the people of China have been enthralled and entertained by stories of real historical figures and events of the past, and have retold the stories until they have become legendary. And the best part? They are all true.

Nineteen of the most important and fascinating tales were translated from their original Chinese for this two-volume set of Chinese Historical Stories. They represent the most entertaining, well-known, and historically significant stories beloved by children and adults alike.

Volume 1 presents stories of kings and queens, generals, battles, and courtiers from the Zhou Dynasty, when China was ruled by kings from 1046 BC to 221 BC. It was the period before the country was unified under a single emperor, when each state schemed to become more powerful than its neighbor, leading to many exciting stories populated by famous historical figures.

Volume 2 is full of tales from the China s Imperial period, when Emperors ruled the unified nation, from 221 BC until 1911 AD. These two thousand years saw many changes from both within the country and from the outside world, and these stories reflect the many facets of Chinese life during times of war and times of prosperity and peace.

Join us on a journey back three thousand years, and dive into a culture and history whose real-life stories are as dazzling and enchanting as any fairy tale.