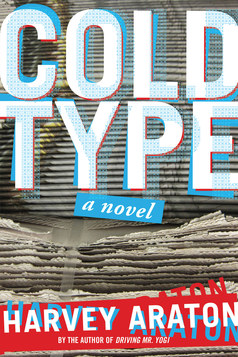 In times of change, American novelists return to old themes. In Cold Type--as in Arthur Miller's Death of a Salesman--a son and his father struggle to hold onto what they think is right. It's mid-1990s; and "cold type" technology, a.k.a. computerized typesetting, wreaks havoc among workers in the newspaper industry. A fabulously wealthy Briton buys the New York City Trib and immediately refuses to negotiate with the truck drivers' union. In solidarity, all the other blue collar unions take to the streets. Jamie Kramer is a reporter for the Trib. His father is a hardcore shop steward (unusual for a Jew in Irish-dominated unions) from the old day of "hot type," but who has become a typographer in a world he doesn't understand. His father expects Jamie not to cross the picket line. It would be an act of supreme disrespect. But that's not so easy for Jamie. His marriage has fallen apart, he desperately needs his paycheck for child support, and he needs to make his own life outside the shadow of his father.

Harvey Araton, a celebrated sports columnist for The New York Times authored the New York Times best-selling Driving Mr. Yogi about the famous catcher's relationship with pitcher Ron Guidry, and When the Garden Was Eden: Clyde, the Captain, Dollar Bill, and the Glory Days of the New York Knicks (one reviewer said Araton writes like Earl the Pearl Monroe played basketball). Cold Type is Araton's first novel. Besides his duties as columnist for the Times, he's an Adjunct Professor at Montclair State University in New Jersey where he lives.