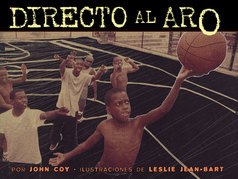 Translated from Strong To The Hoop, Directo el aro captures the intensity and emotion of the competition and the urban pace of the game.