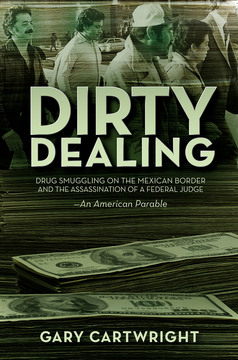 Dirty Dealing, a true story, chronicles the rise and fall of the house of Chagra. The Chagra brothers of El Paso were pioneers in smuggling drugs across the Mexican border, and were infamous for their fabulous wealth. But in the end Lee Chagra was gunned down, a federal judge was assassinated, Jimmy and Joe Chagra were imprisoned, and Charles Harrelson (Woody Harrelson's father) was convicted for the judge's murder.

When Federal Judge John "Maximum" Wood was gunned down outside his home in San Antonio, Texas in 1979 (the first assassination of a federal judge in more than 100 years) his death sent waves of shock across the country. The FBI labeled it "the crime of the century." Former President Nixon expressed "outrage," calling for quick arrest and punishment. But the crime's solution would be anything but quick. Dragging on for years and costing $11.4 million, the investigation turned out to be the largest in recent FBI history, surpassing even that of President John F. Kennedy's assassination.

Gary Cartwright, senior editor of Texas Monthly and author of several nonfiction bestsellers, details the full history of the events leading up to this crime and the trials that followed in Dirty Dealing. This reprint from Cinco Puntos Press includes a new afterword by the author. Complete with shady maneuverings on the part of the federal government and an outcome that Kirkus Reviews has called "straight from Oz," Dirty Dealing is one of the richest and most fascinating of all true crime stories.

Gary Cartwright was born August 10, 1934 in Dallas, Texas, and raised in nearby Arlington. He received a B.A. in journalism and government from Texas Christian University in 1957. Cartwright reported the police beat for the Fort Worth Star-Telegram from 1956 until he was hired away in 1958 to the Fort Worth Press, where he joined Dan Jenkins and Bud Shrake in the sports department under legendary Texas sportswriter Blackie Sherrod. In 1960, Cartwright moved to the Dallas Times Herald as a sports reporter and in 1963 he joined the Dallas Morning News to write his own sports column. Cartwright's first book, a football novel entitled The Hundred Yard War, was published in 1967 at which point he left newspaper work to became a freelance writer. His work has appeared in The Texas Observer, Esquire, Saturday Review, Rolling Stone and Texas Monthly. He passed in February 2017.