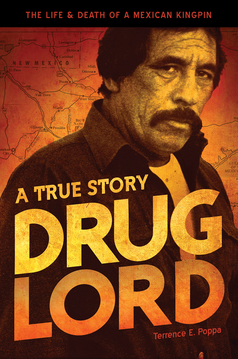 Drug Lord: A True Story: The Life and Death of a Mexican Kingpin

A new edition of a True Crime Classic with new preface and introduction."The [drug smuggling] business goes on, the slaughtered dead pile up, the U.S. agencies continue to ratchet up their budgets, the prisons grow larger and all the real rules of the game are in this book, some kind of masterpiece." Charles Bowden from the Preface.

Twenty years after writing Drug Lord, Terrence Poppa decided the information in his book was more important than ever. In an important interview with the Texas Tribune, Poppa explains that "The Mexico that I wrote about in the book describes the old order of things: Mexico under the PRI. In that sense, the book was out of date, because how drug trafficking operated under the PRI is completely different than how it works today in a new Mexico, under the democratically transformed Mexico…There has been a decoupling of the highest levels of power from drug trafficking now. It's important for people to understand that, so I had to bring the book up to date."

Terrence Poppa, an award-winning journalist, is widely respected as an expert in narco-trafficking. He was a finalist for the 1987 Pulitzer Prize for his investigations into the connection between crime and government in Mexico. He was featured in Standoff in Mexico, a PBS production about fraudulent elections in Mexico. Due to his unique insights into the world of Mexican drug trafficking, Poppa has been widely interviewed on radio and television, including Larry King and the O'Reilly Factor.