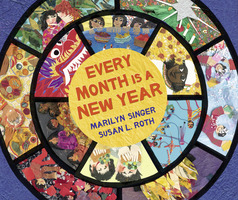 Every Month Is a New Year: Celebrations Around the World

In many places around the globe, the new year starts on January 1. But not everywhere! Chinese New Year is celebrated in January or February. Iranians observe Nowruz in March. For Thai people, Songkran occurs in April. Ethiopians greet the new year at Enkutatash in September. All these celebrations, and many others, have deep-rooted traditions and treasured customs.

Acclaimed poet Marilyn Singer has created a lively poetry collection that highlights sixteen of these fascinating festivities, some well-known and some less familiar. Together with Susan L. Roth’s captivating collage illustrations, the poems take readers to the heart of these beloved holidays. Every month of the year, somewhere in the world people celebrate with joy and good wishes for a happy new year.

recipient of the 2015 NCTE Award for Excellence in Poetry for Children, is the author of more than one hundred award-winning books for young readers, including Lee & Low’s A Full Moon Is Rising. Her works have won numerous honors, including the Lee Bennett Hopkins Poetry Award Honor and the Orbis Pictus Honor, and several Notable, Parents’ Choice, and Children’s Choice Awards. She and her husband live in Brooklyn, New York, and Washington, Connecticut. Visit her online at marilynsinger.net.

creates unique mixed-media collage illustrations that have appeared in numerous award-winning children’s books, many of which she also wrote. Her book, Listen to the Wind, spent a year on the New York Times best seller list. The Mangrove Tree, which was released in 2011 and addressed Dr. Gordon Sato's mangrove tree-planting project, was the winner of Jane Addams Children's Book Award. Roth lives in New York. You can find her online at susanlroth.com.