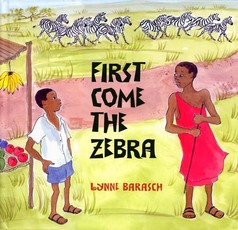 Written and illustrated by Lynne Barasch

One day when Abaani, a Maasai boy, takes his family’s cattle out to graze, he is surprised to see a Kikuyu boy, Haki, tending a new fruit and vegetable stall alongside the road. The boys know of the traditional conflicts between the Maasai and the Kikuyu. They take an immediate dislike to each other.

A short while later, as customers surround Haki’s stall, a dangerous situation suddenly arises. Abaani calls to Haki, and together they act quickly. Little do the boys know they have also taken the first step in overcoming their differences and forging a path to friendship.
Framed by the annual great migration of animals to Kenya, First Come the Zebra looks beyond current conflicts toward the hope for peaceful coexistence. This appealing story is an encouraging tribute to the potential of today’s youth to make a difference in the world.

Lynne Barasch was inspired to write First Come the Zebra by the beauty of the land and people of Kenya, which she visited in 2007.

has written and illustrated several award-winning books for children, including Knockin' on Wood, Hiromi's Hands, and First Come the Zebra, all three published by Lee & Low Books; and Radio Rescue, an ALA Notable Children’s Book and Texas Bluebonnet Award Masterlist selection. Barasch and her husband live in New York City. To find out more about Lynne Barasch, visit LynneBarasch.com