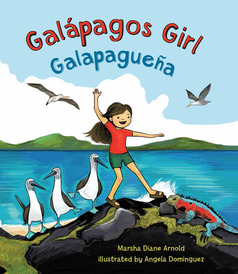 For Valentina, living on the Galápagos islands means spending her days outside, observing the natural world around her. She greets sea lions splashing on the shore, scampers over lava rocks with Sally-lightfoot crabs, and swims with manta rays. She is a Galápagos girl, and there is no other place she’d rather be!

But this wondrous world is fragile, and when Valentina learns her wild companions are under threat, she vows to help protect them and the islands.

Whimsical illustrations by Pura Belpré Honoree Angela Dominguez transport readers to the unique Galápagos islands, which shelter a number of diverse plant and animal species that can be found nowhere else on the planet. Come discover this beautiful world with Valentina and her animal friends!

is an award-winning picture-book author. Her past titles include the Smithsonian Notable Book The Pumpkin Runner and Lost. Found., which received three starred reviews. Marsha was inspired to write this story after traveling to the Galápagos Islands, where she met Valentina Cruz and had the opportunity to swim with sea lions and dolphins. She lives with her family in Alva, Florida. You can find her online at marshadianearnold.com.

is the author and illustrator of several books for children, including the Children's Book Press title Let Me Help! / Quiero ayudar!, Marta Big and Small, and Maria Had a Little Llama, which received the Pura Belpré Illustration Honor. In 2016, she received her second Pura Belpré Honor for her illustrations in Mango, Abuela, and Me by Meg Medina. When Angela is not in her studio, she teaches at the Academy of Art University, which honored her with their Distinguished Alumni Award. She lives in Virginia. Visit her online at angeladominguezbooks.com.