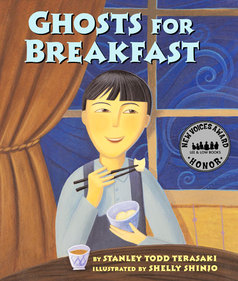 The pounding on the door brings three unexpected guests to our young narrator's home — Mr. Omi, Mr. Omaye, and Mr. Ono. The Troublesome Triplets, as they are called because they always seem to have some sort of complaint, have just seen ghosts — dozens of them — in Farmer Tanaka's field! The ghosts were long and thin and white, very white, and they were dancing in the moonlight.

Papa thinks the situation is great fun, but his son isn't so sure. After all, there are ghosts out there. So Papa decides to get to the bottom of the Triplets' story. He sets off to hunt the ghosts, and he takes his son with him.

Set in California in the 1920s, this delightful father-son story speaks to all young children who yearn to overcome their fears. Readers also come to realize the hazards of jumping to conclusions, for things aren't always what they seem.

In 2000, Lee & Low established its annual New Voices Award to encourage writers of color to enter the field of children's literature. Ghosts for Breakfast was one of the honorees that year.

AUTHOR'S NOTE: In the late 19th century, Japanese immigrants began arriving on the west coast of the United States. Many became farm laborers and later began farming on their own, and several cohesive farming communities developed. In the San Joaquin Valley, in central California, dozens of Japanese farmers established a Yamato Colony, or "New Japan." In southern California, Japanese truck farms flourished, producing vegetables for market. In the 1920s, my father grew up on such farms in Orange County and the San Fernando Valley. Long Beach, south of Los Angeles, also had a thriving Japanese farming community. As a teenager my mother worked at a produce stand where farmers from Long Beach sold their goods.

makes his picture book debut with GHOSTS FOR BREAKFAST, which is based on a similar incident encountered by his mother's great-great-grandfather. Terasaki has a master's degree in counseling and is currently a middle school Assistant Principal in the Los Angeles Unified School District. He has also written two plays that have been performed locally. Terasaki lives in Torrance, California, with his wife and their three children.

is a full-time artist and illustrator. She has a bachelor of fine arts degree in illustration from the Art Center College of Design in Pasadena, California, and has worked in animation, for children's magazines, and for educational publishers. Shinjo and her husband live in Sedona, California. Ghosts for Breakfast is her first picture book. To find out more about Shelly Shinjo, visit her Web site: www.shellyshinjo.com