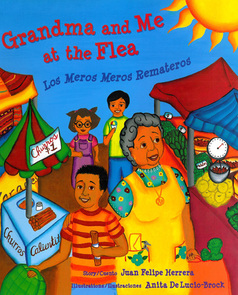 Grandma and Me at the Flea / Los Meros Meros Remateros

Every Sunday Juanito helps his grandmother sell old clothes beneth the rainbow-colored tents at the remate, the flea market. There, Juanito and his friends romp from booth to booth, fulfilling Grandma's vision of the remate as a sharing community of friendly give-and-take.

Juanito gallops to the jewelry-man, who gives Juanito a copper bracelet and a watch for Grandma in exchange for her help sending money orders home to Mexico. Señora Vela gratefully accepts a bundle of Grandma's healing herbs in return for sacks of ruby red chiles. With every exchange Juanito learns firsthand what it means to be a true rematero - a fleamarketeer - and understands that the value of community can never be measured in dollars.

Using Dual Language/Bilingual Books and Parent-Volunteers to Foster Deep Thinking with Grandma and Me at the Flea.

was born in Hidalgo, Mexico, and grew up in Southern California. A graduate of Stanford and the University of California, Berkeley, Anita began making art while in graduate school. Anita paints on wood and canvas, and also creates altars for el Día de los Muertos, the Mexican Day of the Dead. She lives in San Francisco, California.