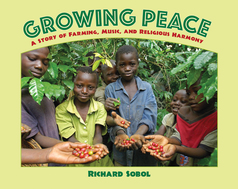 Growing Peace: A Story of Farming, Music, and Religious Harmony

Written and photographed by Richard Sobol

On the morning of September 11, 2001, J. J. Keki, a Ugandan musician and coffee farmer, was in New York, about to visit the World Trade Center. Instead, J.J. witnessed the terrorist attack on the Twin Towers. He came away from this event with strong emotions about religious conflict. Why should people be enemies because of their religions?

Back home in his village, J.J. was determined to find a way for people who held different religious beliefs to work together. He saw that the neighborhood children, from Jewish, Muslim, and Christian families, played with one another without a care about religion. Why not enlist their parents, all coffee farmers like himself, in a cooperative venture around a shared goal? Together they would grow, harvest, and sell their coffee. At the same time, they would bridge religious differences to work and live together peacefully.

This photo-essay is a rare and timely story of hope, economic cooperation, and religious harmony from an often struggling part of the world. From J.J.’s vision, his community has achieved what many people strive for: a growing peace.

RICHARD SOBOL is an award-winning photojournalist who has created more than a dozen photo-essays for young readers. His books explore a wide range of wildlife, conservation, environmental, and cultural topics. While visiting Uganda, Sobol learned about a village where people of three faiths had come together in harmony in the aftermath of 9/11, and he was inspired to tell their story for children. Sobol’s photographs have also appeared in several publications, including The New York Times, Audubon, People, and National Geographic. When not traveling and photographing the world, Sobol can be found in Cambridge, Massachusetts, where he lives with his family. Find him online at richardsobol.com.