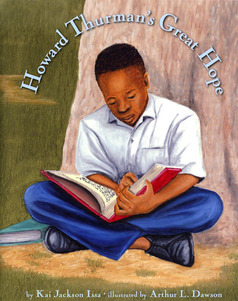 Born in segregated Daytona, Florida, in 1899, Howard Thurman grew up dreaming of a better life—a life where his mother and grandmother would not have to cook and clean for other people; a life where he could become a college man, honoring his late father’s wishes and his own dreams.

Through hard work, perseverance, and the support of friends and family, young Howard transcended the limits on Negro education in Daytona and earned a scholarship to an out-of-town high school. His dream did not come easily and was nearly lost, until a kind act by a stranger at a railroad station aided Howard in a time of need.

A moving testament to the bonds of community and the power of faith, Howard Thurman’s Great Hope illuminates the early life of the man who became a seminal civil rights leader and an inspiration to the nation.

This is the first book of both Kai Jackson Issa and Arthur Dawson.

is a freelance writer and managing editor with The Howard Thurman Papers Project at Morehouse College in Atlanta. Jackson Issa lives in Clarkston, Georgia, with her husband and their two children.

is a self-taught artist who grew up in Wakulla County, Florida. With an established career as a fine artist, Dawson also spends time teaching art to young people as part of his two nonprofit endeavors: the Youth Art Program and Younique Art Parables. He lives in California but often returns to his native Florida.