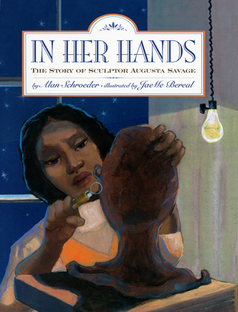 In Her Hands: The Story of Sculptor Augusta Savage

As a young girl in Florida in the 1890s, Augusta enjoyed nothing more than playing with clay. She would happily sculpt it into little figures: cows, chickens, ducks. Augusta’s mother didn’t mind but her father, a stern preacher, felt the girl was wasting time on idle nonsense.

With her mother’s support, Augusta’s sculpting talent blossomed as she grew into a young woman. Eventually, Augusta found herself at a crossroad. She wanted to pursue a career as an artist, but to do so she would have to leave behind all she knew. With only her passion to guide her, Augusta headed to New York City to follow her dream wherever it might take her.

Award-winning author Alan Schroeder deftly weaves together known historical details to create a compelling portrait of this unique Harlem Renaissance sculptor. Warm, inviting paintings capture both Augusta Savage’s struggles and resilience as she skillfully carved out her own special place in art history.

is the author of several acclaimed picture books that capture the early lives of notable African Americans. His work has earned ALA Notables and has been honored among TIME magazine’s Best Children’s Books of the Year. Schroeder lives in Alameda, California.

is a fine artist and sculptor who, like Augusta Savage, discovered her passion at a young age. But unlike Savage, Bereal comes from a long line of supportive artists, including both of her parents. When she isn’t painting or sculpting, Bereal enjoys yoga and dance. She lives in Berkeley, California, and can be found on the Web at jaemebereal.com. This is her first picture book.