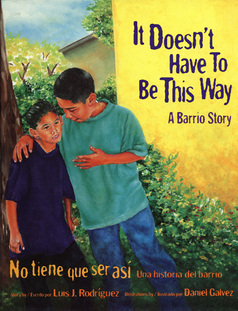 It Doesn't Have To Be This Way / No tiene que ser así: A Barrio Story / Una historia del barrio

Monchi likes to write poems, hang out with his cousin Dreamer, and tell stories to his uncle, Tío Rogelio. Then one day, a member of the local gang tells him it's time to join up. "But first you have to prove yourself," he says.

Monchi is scared but excited. He writes his name on the school wall, steals a bike, and buys a knife. The older boys give him a handshake, girls talk to him, and even teachers are afraid of him. But when a tragic event changes everything, Monchi must make an important decision.

It Doesn't Have To Be This Way is a compelling tale of a young boy's encounter with the world of gangs—a world that author Luis J. Rodríguez knows firsthand. Through his mesmerizing true-to-life story and the dynamic illustrations of artist Daniel Galvez, we see how Monchi is both attracted to the community of gang life and repelled by its violence. There is no easy answer to his dilemma, but the love and respect of his Uncle Rogelio help him find a way out.

is the critically acclaimed author of Always Running: La Vida Loca, Gang Days in L.A., the inspiring story of how he found a way out of gang life in Los Angeles. Now a prominent poet, author, and educator, Rodríguez frequently travels throughout the country, educating the public about youth and violence, and counseling young people in gangs. He lives in Chicago with his wife, Trini Rodríguez, and their two young sons.

has been creating public murals since 1976. His photo-realist style and focus on the strength of the human spirit have earned him numerous awards and national recognition. His public commissions have included a mural on Chinese immigration to California; a X at the Audubon Ballroom in Harlem, New York. Galvez lives in Oakland, California, with his wife, librarian Joan Galvez.