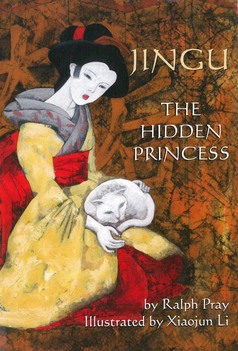 To young Princess Jingu, the Japanese Imperial Palace in the 4th century is full of secrets. Why is she not allowed any visitors or friends when other children run and play together? Why is she the only princess with a private teacher from China? Her life within the palace walls is solitary and studious, and she has only her servants, teachers, and faithful cat Skoki to keep her company. But on Jingu’s 10th birthday, she receives a gift from the Emperor with a mysterious message hidden inside, and everything changes.

Explore the fascinating world of ancient Japan in this historically-based account of a young princess’ journey from girl to true leader. As her travels take her from a tiny fishing village to the grandeur of the Emperor’s chambers, Jingu must find out what, and who, is hidden beyond the paper walls of her home secretly guiding her future. Only then will she face her destiny and take her rightful place in the magnificent history of Japan.

is an engineer and author who owns an independent research laboratory in Los Angeles County to resolve problems in the mineral industry. He has taught engineering at the university level and has been writing for publication for forty-five years. He and his wife Bev raised their four children in Alaska, Chicago, and Pasadena, and they now live in Monrovia, California. This is Ralph’s first book for children.

is an internationally known children's book illustrator, earning him awards in China, Japan, and the United States. Other picture books he has illustrated Include The Narwhal's Tusk and The Magic Brocade. Born and raised in Chinese Inner Mongolia, Xiaojun Li now lives with his wife and son in Davis, California.