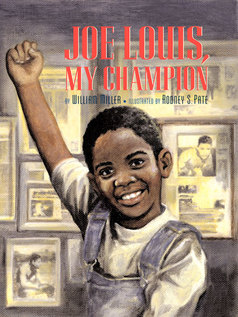 It’s the spring of 1937, and anticipation for the heavyweight title fight between Joe Louis and James Braddock is at a fever pitch. Sammy can hardly contain his excitement. He knows his hero, Joe Louis, will soon be the boxing champion of the world.

Although he isn't big and strong, Sammy wants to be a boxer, just like Joe Louis, whose fame and success are a source of great pride and hope for African Americans. Only after Sammy realizes the significance of Louis's victories in the ring does he understand the true meaning of being a champion.

Joe Louis, My Champion is a heartfelt tribute to the first African American to be regarded as a hero by all Americans. Louis's enduring legacy of determination and perseverance is sure to inspire readers to find and fulfill their dreams.

has been illustrating books for children for more than twenty years, and his fine art work has been exhibited at the Society of Illustrators in New York City. Currently Pate also works as a graphic designer for a software company. He lives in Bloomfield, New Jersey.