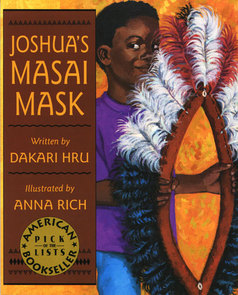 Joshua loves playing his kalimba, a traditional African musical instrument. But when his family suggests he join the school talent show, he thinks it's a terrible idea — all his classmates like rap. Wishing to be popular, Joshua turns to his Uncle Zambezi, who gives him a magical Masai mask. Little does he know, the mask will grant Joshua his wish, and more..

Anna Rich's illustrations give the humorous characters spunk and charm, while Dakari Hru creates a fun, positive tale in which a young boy learns what it's like to be in someone else's shoes.

(1952- 1994) was born in Pittsburgh, Pennsylvania. A writer, poet, and storyteller, he held a B.A. in French and an M.A. in psychology. Mr. Hru's poetry was featured in the award-winning anthology Make a Joyful Sound, published in 1991. Joshua's Masai Mask is his first picture book. He died in 1994 after a brief illness.

has provided illustrations for national magazines and newspapers. She has wanted to be an illustrator since she was in high school. Ms. Rich attended the Rhode Island School of Design and works for the Graphic Artists Guild. She resides in Elmont, New York.