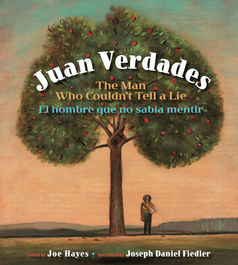 Don Ignacio is a wealthy landowner whose prized possession is an apple tree that produces the most delicious fruit around. He trusts only one man to care for this tree--his ranch foreman Juan Verdades. Don Ignacio is also a proud man and he lets his pride carry him into a dangerous bet! He bets a neighboring rancher his ranch that Juan Verdades cannot tell a lie. His opponent is determined to win the bet, using guile and the help of his beautiful daughter to trick Juan Verdades into stealing all of the fruit from the prized apple tree. Will Juan Verdades be able to tell the truth about what he has done? The ranch depends on it.

Originally published in 2001, this paperback edition of Joe Hayes' classic story features the bilingual style common to his most popular books. Joe's bilingual Spanish-English tellings and books have earned him a distinctive place among America's storytellers. He lives in Santa Fe and travels extensively throughout the United States telling his stories.

Joseph Daniel Fiedler was born and raised in the Appalachian hill country of Western Pennsylvania. He attended the Ivy School of Professional Art and Carnegie Mellon University. His work has appeared in numberous national and international publications, including Time and Business Week, and he is the recipient of a Silver Medal from the Society of Illustrators for book illustration.