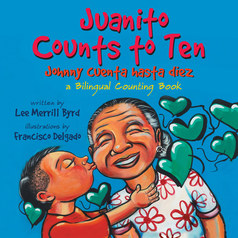 Juanito loves to count, and what could be more fun than giving and counting kisses! Children's book author Lee Merrill Byrd was inspired to write Juanito Counts to Ten when she watched her four-year-old grandson Johnny. He was so happy and full of life that he was dishing out kisses to everybody. He kissed his mother, his father, Stray Gray the Cat, and, of course, his grandmother! He was so happy he even kissed his bossy big sister. Previously published in hardback as Lover Boy.

Lee Merrill Byrd's three children's books tell stories based off her grandchildren-- Treasure on Gold Street was about her first granddaughter, Juanito Counts to Ten focuses on her oldest grandson, and Birdie's Beauty Parlor on her second granddaughter!

Lee Merrill Byrd, novelist and publisher, was born and raised in New Jersey but has spent most of her life in the Southwest. Besides being an award-winning author, Lee is known as a pioneer in children's bilingual books as one of the co-founders Cinco Puntos Press (now a Lee & Low imprint), a publishing company named after their neighborhood in El Paso, Texas.

In October 2003, Cinco Puntos published Lee's first picture book for children, The Treasure on Gold Street, A Neighborhood Story in Spanish and English. It received a Skipping Stones Honor Book Award, a Southwest Book Award, a Paterson Poetry Center Prize, and a Teddy Award from the Texas Writers League.

Francisco Delgado, a fronterizo artist, was born in Ciudad Juarez, Chihuahua in 1974. Through out his life he has resided in both twin cities of El Paso and Ciudad Juarez.

Delgado's artworks reflect the United States and Mexican Border life and speak to the working class of the barrios. His visual language often uses iconic figures like El Chapulin Colorado, George W. Bush, Tin Tan, Lady Liberty, and Luchadores among many others to convey his political narrative. Even though his body of work is political and his message is direct it is delivered with the dark sarcasm and humor that is often found in Mexican, Chicano and Fronterizo Cultures.

He attended the University of Texas at El Paso where he received several honorary awards and a BFA. He received his MFA from the Yale School of Art. His paintings have been on book covers, in national art exhibits, private collections and community institutions. Delgado's first picture book was, ¡Sí, Se Puede! / Yes, We Can! His second book was Juanito Counts to Ten, and Birdie's Beauty Parlor his third. Francisco and his wife Barbara have three children, Pedro, Xitlali and a Xochi.