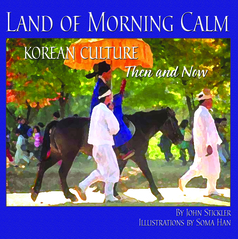 Land of Morning Calm: Korean Culture Then and Now

What was life like in Ancient Korea? What did people eat? What did they believe in? How is it different now?

Take a journey to both ancient and modern Korea, where you will find a rich world of history and traditions that will capture your imagination and whet your appetite for learning more about this fascinating culture.

Read about the legend behind the founding of Korea, the meaning of the flag, and the creation of the Korean alphabet. Learn how to make kimchi, how to celebrate Korean holidays, and how people ironed their clothes before electricity. Every page explains an aspect of Korean culture and its changes through the years.

As North and South Korea quickly become important players in global politics, Land of Morning Calm gives us a better understanding of the people behind the news and the traditions we don’t get to see on television. It opens a window into another way of life, reminding us once again that we are all as similar as we are different.

John Stickler is a graduate of Yale University, and spent thirteen years in Korea from 1963 to 1976. During that time, John lived in Seoul reporting news for the CBS radio network. John currently lives in California, after a checkered career in journalism, advertising, public relations and publishing. His latest book Maya and the Turtle: A Korean Fairy Tale, which he worked on together with Soma Han, has won the Morning Calm Medal from Korea.

Soma Han was born in the agricultural southeastern part of the Korean peninsula. She has a BA in literature and a BFA degree from the California College of Arts & Crafts. Her paintings have been exhibited in galleries in Arizona, California, New York, Washington, D.C., Hong Kong and Korea. Soma is also the illustrator of Tigers, Frogs and Rice Cakes: A Book of Korean Proverbs as well as the co-author and illustrator of Maya and the Turtle: A Korean Fairy Tale, which won the Morning Calm Medal from Korea.