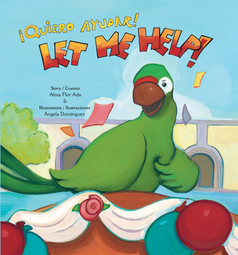 Perico learns this phrase from little Martita, who’s been saying it a lot lately. When the whole family scrambles to prepare for Cinco de Mayo, Perico knows there must be some way he can help—even if he is just a parrot.

Perico tries to help abuela make delicious tamales. He tries to help craft beautiful paper flowers for the barge his family will take down the San Antonio River. He tries to help the boys practice their mariachi number on the porch. But at every turn Perico is shooed away, until he finally figures out how he can add something special to the Cinco de Mayo fun.

Acclaimed author Alma Flor Ada’s tale is the story of every young reader who has been told he or she is too little or too young to help. Angela Domínguez’s vibrantly hued paintings glow with the rich colors of the southwest. Let Me Help! is a joyful read-aloud even the littlest helpers can celebrate year-round.

is an award-winning children’s book author, a gifted translator, and one of the leaders in the field of bilingual education in the United States. Born in Cuba, Alma Flor received her PhD at the Pontifical Catholic University of Lima, Perú, did her post-doctoral research at Harvard University as a Fellow of the Radcliffe Institute, and is a Fulbright Research Scholar. A Professor Emerita at the University of San Francisco, Alma Flor currently lives in Northern California’s Marin County.

is the author and illustrator of several books for children, including the Children's Book Press title Let Me Help! / Quiero ayudar!, Marta Big and Small, and Maria Had a Little Llama, which received the Pura Belpré Illustration Honor. In 2016, she received her second Pura Belpré Honor for her illustrations in Mango, Abuela, and Me by Meg Medina. When Angela is not in her studio, she teaches at the Academy of Art University, which honored her with their Distinguished Alumni Award. She lives in Virginia. Visit her online at angeladominguezstudio.com.