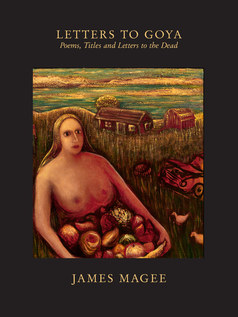 Letters to Goya: Poems, Titles and Letters to the Dead

"This book presents two bodies of writing by James Magee. The first is "Letters to Goya," a collection of twenty-three typo-filled letters written on a manual typewriter from the Waikiki Trailer Park in Sweetwater, Texas. Turning the book around, you will find a second collection, a selected compilation of titles from Jim’s artwork, representing decades of both writing and performance by the artist and his multiple selves. Reading this book is not unlike the act of trying to understand Jim’s life. It requires twisting, turning, reorienting. You can enter at any point and find the story changing and growing as Jim plays conductor to a symphony of voices familiar and strange." -- from the Middleword by Kerry Doyle

The first section of this utterly unique book of art, poetry, and poetic prose is made up of letters are written by a woman referred to as "The Duchess," from a trailer park in a small town in Texas, to her lover the 19th-Century artist Francisco Goya. As surreal as the premise of the letters is, the letters themselves are simply the funny, poignant, and introspective thoughts of a lonely woman growing old. The Duchess shares wise and insightful thoughts like, "I think clarity is a matter of grace, like strength, given forth from the earth from which you were born," along with mundane stories from her world with a touch of humor, like: "Anyway, to get to the point, Henry is dying and wants to be cremated and he asked Mary to climb up the Big Spring water tower to spread his a-shes [sic] over the city at sunset...Henry, whether he was dying or not, was out of line, what with Mary8s arthritus [sic] and the prospect of her trying to climb to the top of the water tower at dusk."

The second section features poems which title some of the metal sculptures Jim has made over the past several decades, accompanied by photographs of some of these impressive sculptures. Though told from a wide array of perspectives, the poems are connected to the letters of The Duchess by a Both sections are tied together by a sense of awe and a deep longing for connection. Through whatever medium he chooses, James Magee's work is always beautifully unusual to experience. Magee has previously explored architectural stonework with The Hill, scrap metal sculpture, and painting (through his alter ego, Annabel Livermore).

In 1978, the incredibly prolific American artist (and now published poet) James Magee rooted himself in El Paso and Juarez on the U.S. Mexico Border. Michigan-born, Ivy League-educated to be a lawyer, gender-fluid, ex-taxi driver and off-shore roughneck, Magee made his home on the border because he had work to do, big work, big visionary work, and the frontera was a place to be alone to do that work, away from all the jingle-jangle of the NYC arts scene. Besides, he could cross the border and hang in the gay and transgender bars, he could live any life he wanted to live, and he could be the artist (or artists) he wanted to be. The place radiated renegade freedom. Besides, it was a cheap place to be an artist. Somehow, he bought 2,000 acres in the desert wilderness east of El Paso, and began creating The Hill, a massive stone work on the scale of Stonehenge, his on-going opus of the last four decades. He also created large metal collages, ornately framed, which he “titled” with remarkable poems. And then the artist Annabel Livermore (a retired Mid-Western librarian) sprang from Magee’s imagination like Athena sprang from the mind of Zeus. Annabel was not to be alone. Horace Mayfield, a gay artist, likewise sprang fully formed from the same imagination. Annabel lives in one house, Horace lives in another, and Magee migrates between the two. (Mayfield’s house, it should be noted, is outfitted for wheel-chair access because along the way Magee lost both legs to disease. It didn’t slow him down, thanks to prosthetics and incredible determination.) The sculptures and paintings of James Magee and Annabel Livermore (and more recently, Horace Mayfield) have been presented in major exhibitions across the United States and Latin America and have been widely covered by media in Europe. Magee’s The Hill is quickly becoming an art aficionado’s destination, except visits are rare and managed by The Cornudas Foundation. The Smithsonian recently purchased Magee’s archives.