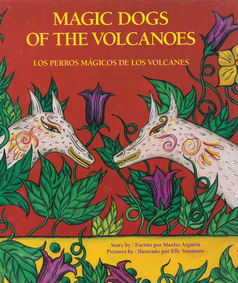 Whenever Salvadoran people gather to tell stories, someone will have a story about the magic dogs called cadejos. There are many stories about how the cadejos mysteriously appear at night to protect people from danger. MAGIC DOGS OF THE VOLCANOES is Manlio Argueta's original story about these famous folkloric animals.

Check out the lesson plan "Family Activities: Dog Effigy" featuring MAGIC DOGS OF THE VOLCANOES by the education team at the North Carolina Museum of Art (NCMA) paired with the work of art Dog Effigy by a Colima artist.

is one of El Salvador's greatest living authors. In 1977 he received Latin America's most prestigious literary award, the Casa de las Americas Prize for Caperucita en la Zona Roja. He is also the author of One Day of Life (Vintage/Random House: 1983) and Cuzcatlan Where the Southern Sea Beats (Vintage/Random House: 1987). Argueta makes his home in San Jose, Costa Rica and travels frequently throughout the Americas This is his first book for children.

is an internationally-exhibited painter. Her first picture book for Children's Book Press, Magic Dogs of the Volcanoes by Manlio Argueto, was highly praised for its rich colors and magnificent imagery. She lives with her family in Lagunitas, California.