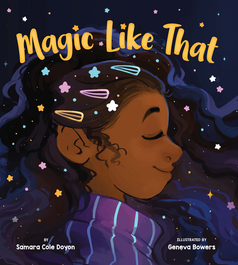 Natural hair is magical, but magic isn't easy. As a young Black girl patiently waits for her mother to finish her newest hairstyle, she wonders what stunning, majestic, awe-inspiring form her hair will take next!

With radiant illustrations by Geneva Bowers and beautiful, poetic text written by Samara Cole Doyon, Magic Like That will inspire young readers of all textures to believe in the beauty of their natural selves.

SAMARA COLE DOYON is a second-generation Haitian American living in the state of Maine–a region of unceded Wabanaki / Abenaki territory where half the roots of her family tree reside. Her picture book debut, Magnificent Homespun Brown, received starred reviews from Kirkus Reviews, Publishers Weekly, and School Library Journal. Samara is the recipient of the Lupine Award and the ILA Children's Fiction Award. You can visit her online at samaracoledoyon.com.

GENEVA BOWERS illustrated the children’s books The Dragon Thief, Beyoncé: Shine Your Light, and Curls, among others. She won the 2018 Hugo Award for Best Fan Artist and a 2018 British Science Fiction Association Award nomination. A self-taught illustrator based in western North Carolina, Geneva loves manipulating color and adding whimsy with a touch of realism and calm. Visit her online at Genevab.com.