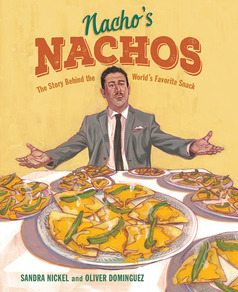 Nacho's Nachos: The Story Behind the World's Favorite Snack

Ignacio Anaya was born in Mexico in 1895, and like a lot of Ignacios, he was nicknamed Nacho. Young Nacho loved to eat and cook, and when he grew up, he found a job in a restaurant. Eventually he became head waiter at the Victory Club, a popular restaurant in Piedras Negras, Mexico, right across the Rio Grande river from Eagle Pass, Texas.

One afternoon in 1940, during the Victory Club's quiet hours between lunch and dinner, Mamie Finan, a regular customer from the US, walked in with three friends. They wanted a snack--something new, something different. Nacho rushed to the kitchen and improvised with what was on hand: corn tortillas, cheddar cheese, and jalapeño peppers. In that moment, Nacho's Special, the dish that later became known simply as "nachos," was born!

Word of this delicious new snack spread quickly. Soon restaurants all over Mexico, the United States, and later the world, were serving nachos. Little did Nacho know that his name would one day be a household word around the globe!

Listen to debut author Sandra Nickel talk about creating Nacho's Nachos, and explore additional activities to go with the book at TeachingBooks.net.

Booklist
The Bulletin of the Center for Children's Books

SANDRA NICKEL makes her children’s book debut with Nacho’s Nachos. She says that story ideas are everywhere; you just have to reach out and grab them. She is a two-time winner of the Hunger Mountain Katherine Patterson Prize for YA and Children’s Writing in the picture book category. A native of Kansas, Nickel now lives in Chexbres, Switzerland, where she blogs about children’s book writers and illustrators at whatwason.com. You can also find her online at sandranickel.com and @senickel.

OLIVER DOMINGUEZ is a freelance illustrator in the summer and during the rest of the year he works as a professor of illustration at Ringling College of Art and Design. Dominguez’s inspirations for his illustrations come from contemporary artists, photography, history books—just about everything and anything. He has a special fondness for historical fashion, knowing the story behind what people used to wear and why. Dominguez and his family live in Cape Coral, Florida. You can visit him online at cargocollective.com/oliverdominguez and @oliverdominguezart.