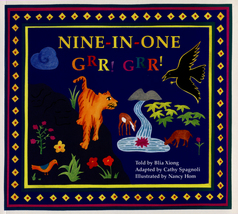 "Nine-in-one, Grr! Grr!" sings Tiger happily as she returns from the kingdom of the great god Shao. Shao has told her she will have nine baby tigers every year as long as she remembers his words: "Nine-in-one." Bird is worried about the prospect of a world full of tigers (tigers who would eat birds!) and sets out to trick Tiger into forgetting her all-important song. Before long, poor Tiger has her song backward—"One-in-nine, Grr! Grr!"—and the balance of nature is ensured.

came to the United States in 1976, fleeing war torn Laos. She settled in Seattle, and in 1976, she formed a Hmong association to preserve the traditional music, dance, crafts, and stories of her homeland.

, a professional storyteller in Seattle, started to collect stories from Southeast Asian refugees in 1983 as a way to build cross-cultural bridges. She met Blia Xiong at that time, and they have since worked together on various Hmong tales.

is a fine artist, printmaker, and graphic designer who is based in San Francisco, California. Her medium for this book was based on traditional Hmong story cloths, which is a technique of colorful multi-imaged embroidery.