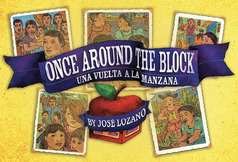 Once Around the Block / Una vuelta a la manzana

Written and illustrated by José Lozano

There’s always a lot of action in the Mexican American neighborhood where Mr. Lozano lives. Amelia argues with Anita; Benito loves bean burritos but not bumblebees; Hortencia and Herminia hover around like hummingbirds; and Zacarias is catching some Zs on Zachary Street. José Lozano’s wacky little stories and illustrations combine Mexican culture with Sesame Street smarts to make for a wonderful read-aloud ABC book in Spanish and English.

José Lozano, who lives in Anaheim, California, is a rising star in the thriving Latino art scene in Los Angeles. His first book, Once Around the Block, came out in 2009. Born in Los Angeles, his family moved to Juárez, Chihuahua, México, when he was a baby. Growing up on the border, he found many of the cultural touchstones that continue to influence his work today -- bad Mexican cinema, fotonovelas, ghost stories, and comic books. Lozano prefers to work in a series, focusing on themes like Mexican wrestlers, paper dolls, and loteria. He did loteria portraits of various light rail riders for the La Brea/Expo Station for the Los Angeles Metro. Lozano teaches elementary school in Anaheim.