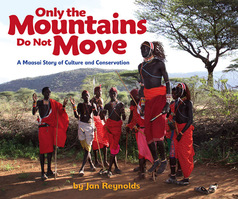 Only the Mountains Do Not Move: A Maasai Story of Culture and Conservation

Nobody can say he is settled
anywhere forever;
it is only the mountains
which do not move from their places.

So goes a Maasai proverb, and so goes the lives of the Maasai in Africa. For hundreds of years they have moved with their herds of cattle and goats across thousands of miles in Kenya and Tanzania.

Today the Maasai face new challenges. Their traditional way of life is threatened, lands are overgrazed, and wildlife is in danger. Maasai tribes are meeting these obstacles head-on—adapting their lives and agricultural practices while keeping their vibrant, close-knit culture alive.

Award-winning author-photographer Jan Reynolds presents a striking glimpse of these dynamic people. Only the Mountains Do Not Move shows one Maasai tribe’s remarkable ability to forge a delicate balance between the richness of the past and the needs of the future.