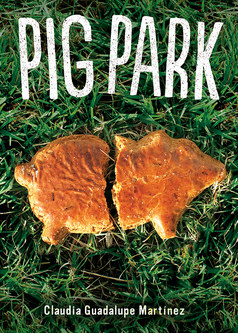 It's crazy! Fifteen-year-old Masi Burciaga's neighborhood is becoming more and more of a ghost town since the lard company moved away. Her school closed down. Her family's bakery and the other surviving businesses may soon follow. As a last resort, the neighborhood grown-ups enlist all the remaining able-bodied boys and girls to haul bricks to help build a giant pyramid in the park in hopes of luring visitors. Maybe their neighbors will come back too. But something's not right about the entrepreneur behind it all. Then there's the new boy who came to help, the one with the softest of lips.

Claudia Guadalupe Martínez grew up in El Paso, Texas. She learned that letters form words from reading the subtitles of old westerns for her father who always misplaced his glasses. At age six, she already knew she wanted to create stories. Her father encouraged her to dream big and write a book or two one day. Although he passed away when Claudia was eleven, her mother, family and many others continued to encourage her writing. She went on to receive a degree in literature from Claremont McKenna College on a full ride and later moved to Chicago to become one of the city's youngest non-profit executives before turning her attention to the completion of her first book, The Smell of Old Lady Perfume.