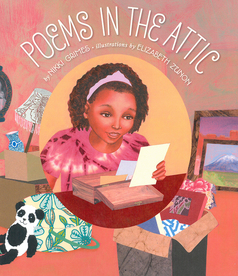 Poems in the Attic

During a visit to her grandma’s house, a young girl discovers a box of poems in the attic, poems written by her mother when she was growing up. Her mother’s family often moved around the United States and the world because her father was in the Air Force. Over the years, her mother used poetry to record her experiences in the many places the family lived.

Using free verse for the young girl’s poems and tanka for her mother’s, master poet Nikki Grimes creates a tender intergenerational story that speaks to every child’s need to hold onto special memories of home, no matter where that place might be.

Check out an interview between Nikki Grimes and The Horn Book.

bestselling author of numerous books for young people, is noted for the poetry that appears in both her picture books and novels. Her work has been honored six times by the Coretta Scott King Award, most recently in 2014. Additional honors for her books include ALA Notables, Bank Street College’s Best Children’s Books of the Year list, and Notable Social Studies Trade Books for Young People. Grimes lives in Corona, California.

Elizabeth Zunon earned her Bachelor of Fine Arts in Illustration at the Rhode Island School of Design in 2006, and since then she has been illustrating books, as well as making jewelry and handbags. Zunon grew up in Ivory Coast, West Africa, but now lives in Albany, New York.